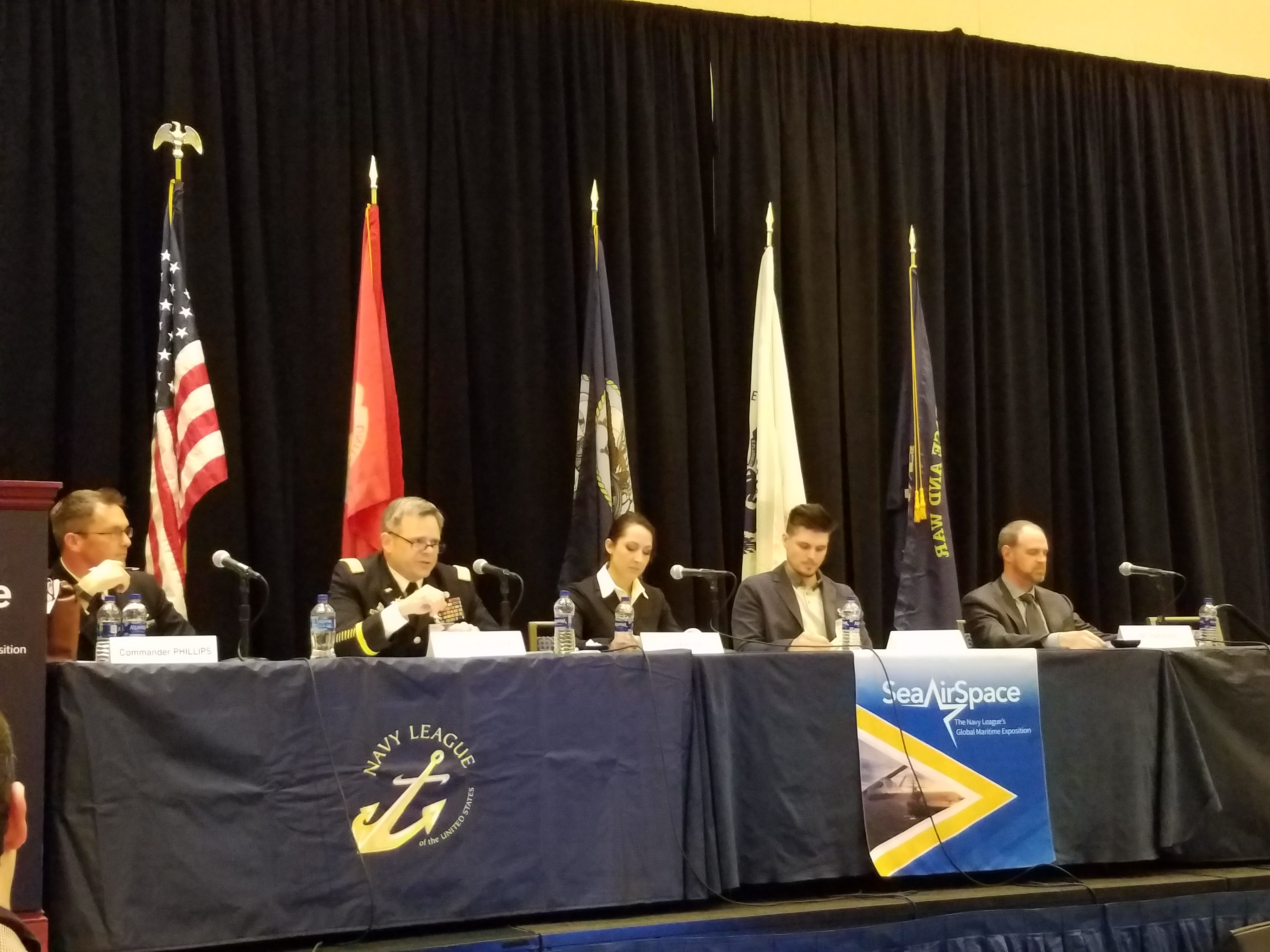 It’s no secret that the gaming and entertainment industry has had a big hand in shaping today’s virtual and augmented reality training programs for the military. Leveraging gaming technology, military services have blazed many new trails in this space, making it possible to boost training efficacy, cost-effectiveness, and overall readiness in today’s warfighters. Ultimately, the trend has resulted in the advent of synthetic training environments, or STEs, across different military services.

The utilization of simulation technology in training programs continues to dominate conversations among military leaders. In fact, last month at Sea Air Space, a panel titled “Innovation in the Use of Gaming for Training” brought together industry and military experts to discuss how “gaming environments are changing what is possible in warfighter training.” The panel was moderated by Commander Henry L. Phillips, USN, NAWCTSD Military Director for Research and Engineering and panelists included:

These leaders from both the military and the gaming/entertainment industry offered a well-rounded perspective on progress in simulation training. Col. Bullock and Dr. Vierling shared real use cases illustrating how STEs are being utilized in the U.S. Army and the U.S. Marine Corps. Mr. Bouw explored the full potential of gaming technologies from a commercial stance and applied that potential to a military backdrop. Mr. Parsons was there to play devil’s advocate, so to speak, sharing important considerations to keep in mind when looking at the implementation of simulation training programs like the synthetic training environment.

Bringing to light the necessary pragmatism of successfully creating and implementing a synthetic training environment, Mr. Parsons discussed the trade-off of choosing to not update training programs with more current technology available. “The stakes are high and the costs of not [implementing this technology] are pretty high,” stated Parsons.

It’s understandable that cost would always be a primary concern, especially for government-run entities like the military, but as the cost of high-end VR and AR programs drops, so too should the need to justify their acquisition. He urged military leaders to “build what you need today. Don’t try to predict what you’ll need in the future.”

The panel shone a light on two important military use cases for synthetic training environments with thoughts from both the U.S. Army and the U.S. Marine Corps. Speaking to the high stakes that Mr. Parsons referred to, Col. Bullock explained the challenges that exist with simulation training programs today and how they are addressing them moving forward, specifically the lack of terrain diversity in the program. In a video he shared, it was stated, “The STE will train soldiers for where they will fight.” The ability to train soldiers effectively in any possible environment with the help of the STE is a top concern for the U.S. Army and its value to warfighters should not be underestimated.

In her introduction, Dr. Vierling discussed the rise of human machine teaming and how the U.S. Marine Corps is utilizing advances from science and technology partners to address some of the challenges that Col. Bullock covered. She said, “We do have an opportunity with a number of the technologies that are out there…particularly in terms of artificial intelligence, machine learning, augmented reality, and a variety of other technologies. Human machine teaming is another one that we’re looking to leverage with these initiatives.” Capitalizing on technology that’s available now as opposed to waiting for future technology that might be better keeps the technological gap in the military from widening.

In the same vein addressing the high stakes of any battlefield situation, Mr. Bouw presented on the importance of haptics and gesture recognition in the creation of truly effective STEs, asking the audience, “How do we communicate in a world where there are no physical constraints?” Haptics and gesture recognition are the elements that really up-level the fidelity of a synthetic training environment, creating more prepared and well-trained soldiers in-theater.

It’s safe to say the discussion around the STE and its impact on warfighters today and tomorrow will remain a top concern for military leaders. As the industry continues to shape and evolve the technology, it’s imperative that military training programs adapt along with them to offer the best possible training scenarios for our warfighters.

← A Look Back at 30 Years of Virtual Reality for Naval Postgraduate School, Modeling, Virtual Environments, and Simulation (MOVES) Institute

The Impact of Emerging Technologies on Training →