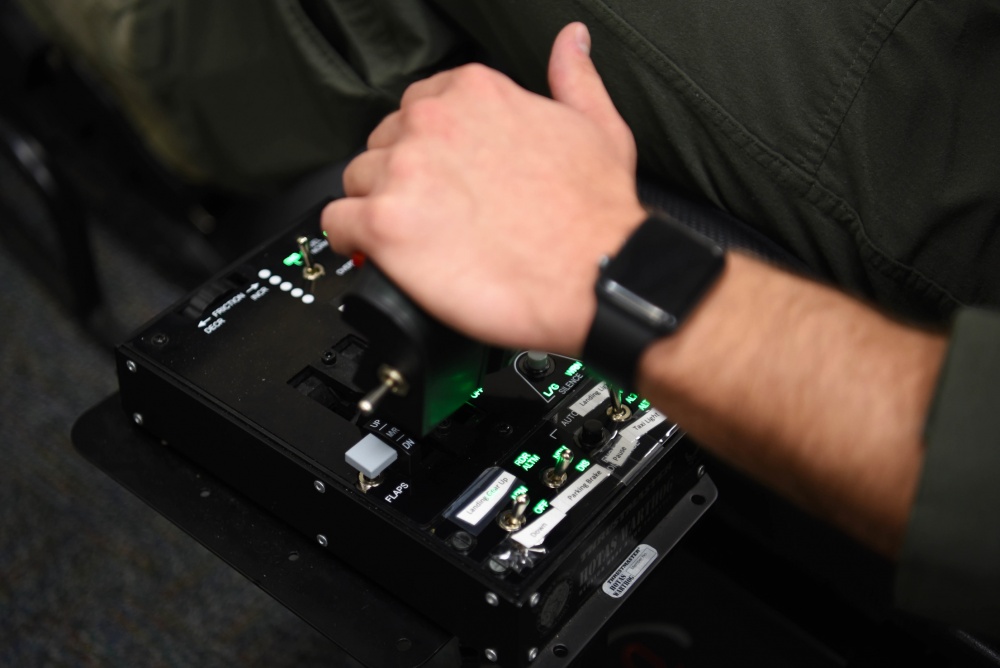 To the men and women that train to fly our military’s supersonic, multimillion-dollar combat aircraft into harm’s way, the benefit of training simulator concurrency with the systems on the actual aircraft is self-evident.

“It’s always been a need,” Alicia Datzman, Senior Manager for Customer Requirements, Live/Blended Training at Collins Aerospace, told us in a recent interview.

In fact, “it’s only going to become more important,” she continued, and, as a former B-1B instructor pilot and now as a liaison between the military users and the industry experts behind those training systems, she understands firsthand how simulator concurrency affects the day-to-day experience of the warfighter: the nuances of what simulator concurrency can do for training effectiveness and the challenges that lack of concurrency can impose upon the training cycle.

In order to better understand these fine distinctions, as only an experienced operator can shed light on them, we sat down with Datzman to explore what progress has been made advancing simulator concurrency, why it’s still as important as it ever was, and more importantly, why it’s going to be even more vital as the nature of warfare advances.

Here is what she had to say:

Modern Military Training (MMT) Editors: How would you define concurrency in a simulated training context?

Alicia Datzman: The most succinct definition I’ve come across is from the Air Force Operational Training Infrastructure Flight Plan from September 2017, and, referencing specifically simulator concurrency here, it is the degree to which the synthetic environment correctly represents the real world.

So essentially, it’s how closely all the pieces of the synthetic training environment represent whatever it is in the real world that it’s modeling.

MMT Editors: As a pilot and later an instructor pilot for a combat aircraft, what benefits do you get when you have simulator concurrency?

Datzman: I’ve seen mission qualification time cut down by half when a simulator became more concurrent with the aircraft.

For example, in the Weapons Systems Trainer (WST), there was a time when we weren’t able to fully replicate all the weapons loads we could carry on the B-1. In reality, there’s a whole buffet of weapons you could put together on the plane, but in the simulator, you could only pick one from a limited set of these loads, which is not how the aircraft was designed.

Thanks to great systems engineers though, that was changed, and we were able to train on whatever weapons loads we needed to accurately train for the mission, Virtual Flag, or our own mission qualification training.

By the time I was an aircraft commander and instructor pilot, we were using the simulator for one of our mission qualification sorties because the WST so well replicated one of the stand-off weapons that we had to use, so it was a much better use of time to accomplish that in the simulator as opposed to an actual aircraft.

In the grand scheme of things, it means that students can devote time in the actual aircraft to learning other skills that they can only get in the aircraft.  What we saw is that we cut our mission qualification time in half because the sim had become more concurrent with the aircraft for that specific type of mission.

MMT Editors: Is it the case then, that greater concurrency across all training systems would be beneficial?  If not, why?

Datzman: The degree to which you want a high-level of concurrency depends on what task you’re trying to teach or train, so there’s a whole range when it comes to how concurrent you want your training system to be.

When I first started flying the B-1, we had a couple different training systems.  One of them was called the Cockpit Procedures Trainer, and if you’ve ever seen the inside of a B-1, there are buttons and switches everywhere, and it’s kind of overwhelming when you first get in there, so those lower cost Procedures Trainers were for those brand-new pilots and weapons systems operators to sit down in there, run your checklists and flip the switches to get a sense of the plane.

MMT Editors: What are some of the pain points that arise when concurrency is not present in a training system?  How do these impact pilot readiness?

Datzman: When the synthetic environment doesn’t line up with what you’ll find in the actual aircraft for the task that you’re trying to train, then you have negative training, and that limits the usefulness of the device.

So, for example, let’s say you did a bunch of landings in the WST, which isn’t built with an accurate aero model of the aircraft, just because it isn’t necessary for its intended training purpose.  That’s not good training because it’s not at all reflective of how the actual aircraft flies.

In practice, you’ll see this because you often have two different companies who are managing changes to the aircraft and to the training device, and there’s got to be syncing up between them, because otherwise you have delays, when one is not going to be reflective of the other, and that opens up more potential for negative training.

MMT Editors: Why is concurrency important, now and in the future?

Datzman: As we look towards more multidomain operations, JADC2, and this next generation of the more connected fight, when information is shared more rapidly and the decisions are then made more rapidly, you’re building tactics, techniques, and procedures for tying those things together. If they’re not highly accurate models of that entity in the real world, be it threats, be it the technology, or be it operator inputs, your tactics could be flawed, because that’s not going to be the way that the information is displayed or that’s not what’s going to happen when you put in a certain input, and now it affects the entire system.  So, I think you’re going to continue to hear that concurrency is a high priority item, and in fact, I’m already hearing that in various conversations about this next evolution in training technology.