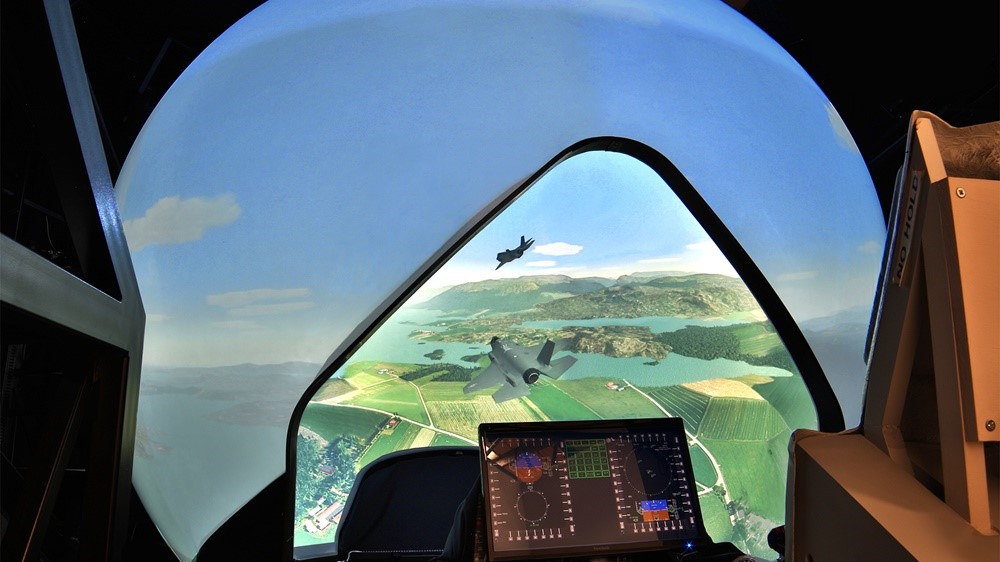 High-Fidelity Flight Simulators Best for the Most Challenging Pilot Tasks

As the Air Force applies innovative training methods to more effectively train the pilots they need—as fewer pilots are available to fly more missions than ever before—there is rightly a focus on cutting edge virtual reality devices. At a lower price point than traditional simulators, they make it easier for student pilots to log simulator time, even unlimited simulator time, and build what Lt. Gen. Stephen Kwast, commander of the U.S. Air Force’s Air Education and Training Command (AETC), called the basic “caveman skills” of flight.

However, it is also true that these technologies only go so far in simulating actual flight. According to Keith Morlock, Director of Fast Jet Programs at Collins Aerospace and a retired USAF instructor pilot, the level of resolution that you can get off of VR headsets is not high enough, nor is the field of vision great enough, to simulate the full experience of flying a fighter aircraft, particularly for the “novice” pilot whose first flight will be solo. The operation of a supersonic weapons platform like the F-35 is simply too complex to be adequately captured in such a setup.

“You have to interact with the cockpit and be surrounded with imagery as you will in the real world, and that’s even more critical today because there’s hundreds of systems” in the cockpit that you have to have a tactile feel for, Morlock elaborated. “And if you’re wearing a display device, other than the aircraft’s actual helmet mounted device (HMD) on your head, that interaction is interrupted.”

And having that instinctual feel and familiarity with the cockpit of the aircraft a student is qualifying on is a crucial aspect of airmanship that the men and women flying our nation’s fast jet aircraft should have.

Morlock holds though, that where it’s absolutely crucial that pilots have an instinctual feel for their cockpits is when they’re doing the most difficult, hazardous tasks that will be asked of them as combat pilots like engaging targets on the ground or in the air, flying in adverse conditions with degraded systems and in air-to-air refueling. In those kinds of instances, it’s important that the pilot be able to train in high-fidelity simulators like Collins Aerospace’s Griffin-2 that both depict outside conditions in the highest possible resolution and whose cockpit layout closely resembles the layout and feel of the actual aircraft.

Outside of a slot in an actual training aircraft, which is a scarce commodity, a simulator that’s tailored to the specific aircraft the pilot is training for and is paired up with Ultra HD totally immersive imaging is the best exposure a pilot can have to the most challenging parts of their profession.

Morlock also offered an additional consideration in favor of high-fidelity simulators, even over seat time in an aircraft. It’s an important one too. “You know you can’t die, which allows you to try out solutions too difficult in flight situations,” he told us.

In an actual plane, one has to consider mortal danger if you don’t do something right, “but if I don’t do this right in a simulator…maybe I can figure out what I need to do when it actually happens in an aircraft,” Morlock continued. That allows pilots to train for hazardous situations more effectively before something catastrophic happens to the aircraft. As an example, Morlock told us of when he’d had multiple system failures including two fire engine fire lights (on a two engine aircraft) on a flight and was able to save the aircraft by falling back on procedures he had run through as trial-and-error experiences in the safe confines of a simulator. The training experience was critical to extricating himself from life-threatening danger.

For these reasons, even among innovative training modernization efforts, high-fidelity simulators retain a place in any fast jet curriculum because they give the pilot a sense of the cockpit and an ultra-realistic depiction of the outside environment. That gives future combat pilots the sensory inputs they need to prepare for the most challenging tasks that they will face without needing to subject them to the dangers inherent in performing those tasks thousands of feet in the air.

Have thoughts on this piece or ideas for other topics we should cover? Reach out to us on Twitter at @ModMilTraining